Coal ash is the second largest stream of industrial waste in the US at approximately 130 million tons produced per year.

No matter how coal ash is stored, it is often mismanaged, and there is a lack of oversight by federal and state governments. The minimal existing oversight often does little to prevent the toxic components of coal ash getting into Americans’ lungs or water supplies, or to ensure that the dams retaining coal ash ponds do not suddenly collapse.

Wet storage of coal ash means that the ash is mixed with water and stored in large ponds like the one pictured at the right. These wet disposal areas are called “surface impoundments,” i.e. “ponds” or “lagoons.” In 2012, 80 percent of all ash that wasn’t “beneficially reused” was stored in onsite surface impoundments and landfills.

Toxic substances contained in coal ash can make their way into water tables nearby their impoundments. Dissolving and slowly seeping into the ground as “leachate” from landfills and lagoons, this invisible stream of heavy metals and contaminants can get into groundwater and aquifers, exposing fish and wildlife to dangerous substances like arsenic.

And contamination is sometimes even approved by environmental “watchdog” agencies! As is visible in the picture to the right, ponds can discharge millions of gallons of contaminated wastewater into rivers and streams (the light colored flow coming from the pond at right is a state-permitted wastewater discharge). Discharges like these can cause huge environmental damage, as happened in an infamous series of events at Belews Lake in North Carolina, which killed off 19 of the 22 species of fish in the lake and was still having major impacts a decade later. 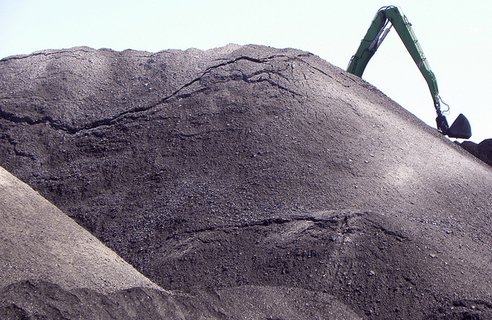 At landfill sites, dry coal ash can be dispersed by wind and blown into neighboring plots of land as “fugitive dust;” this carcinogen-laden dust can be a major health concern when inhaled, affecting the lungs and bronchia.

Landfills are also dangerous to ground water, especially when they are not properly lined. Stormwater can seep through the dry ash, collecting toxins as it percolates down to the ground and into the water table.

As the Southeast’s aging fleet of coal plants retire, and coal ash disasters like the one at Dan River North Carolina make the case for closing out existing dumpsites, the question is now being asked, “How do we close these sites properly and safely?” Utilities’ favorite method of closure is to cap the ash in place and leave it right where it is. However, capping in place does not stop pollution from coal ash impoundments as groundwater water moves through the sites horizontally, not just vertically from falling rain. This is especially the case when coal ash dumps are built on top of existing streams, swamps, and other wetlands.

Research indicates leaching of arsenic and selenium is impacted by whether coal ash pits are aerobic or anaerobic environments (whether oxygen is present). When a coal ash pit is capped, it may become anaerobic which has been shown to increase the leaching of arsenic. EPA and state agencies seem to be completely ignoring this important variable when determining safety requirements and disposal recommendations for coal ash impoundments.

To stop legacy pollution from these sites, coal ash must be removed from old, leaking impoundments and moved to dry, lined storage away from rivers and other waterways. In South Carolina, two utilities are employing this solution across the state, and in some places will even restore the dumpsites to their former state as native wetlands.

The Jury’s Still Out On Coal Ash “Recycling”

Coal ash is commonly re-used in a number of ways. For example, it is used as structural fill or fill for abandoned mines; as a top layer on unpaved roads; as an ingredient in concrete, wallboard, and in school running tracks; as an agricultural soil additive; and as “cinders” to be spread on snowy roads.

48% of the coal ash produced in 2014 was “recycled” in what the Environmental Protection Agency (EPA) and industry call “beneficial re-use.” However, valid concerns exist around the safety of re-using unencapsulated coal ash, as it poses another route for human and environmental exposure. When these uses of coal ash are excluded, the percentage of coal ash recycled drops to around 20%.